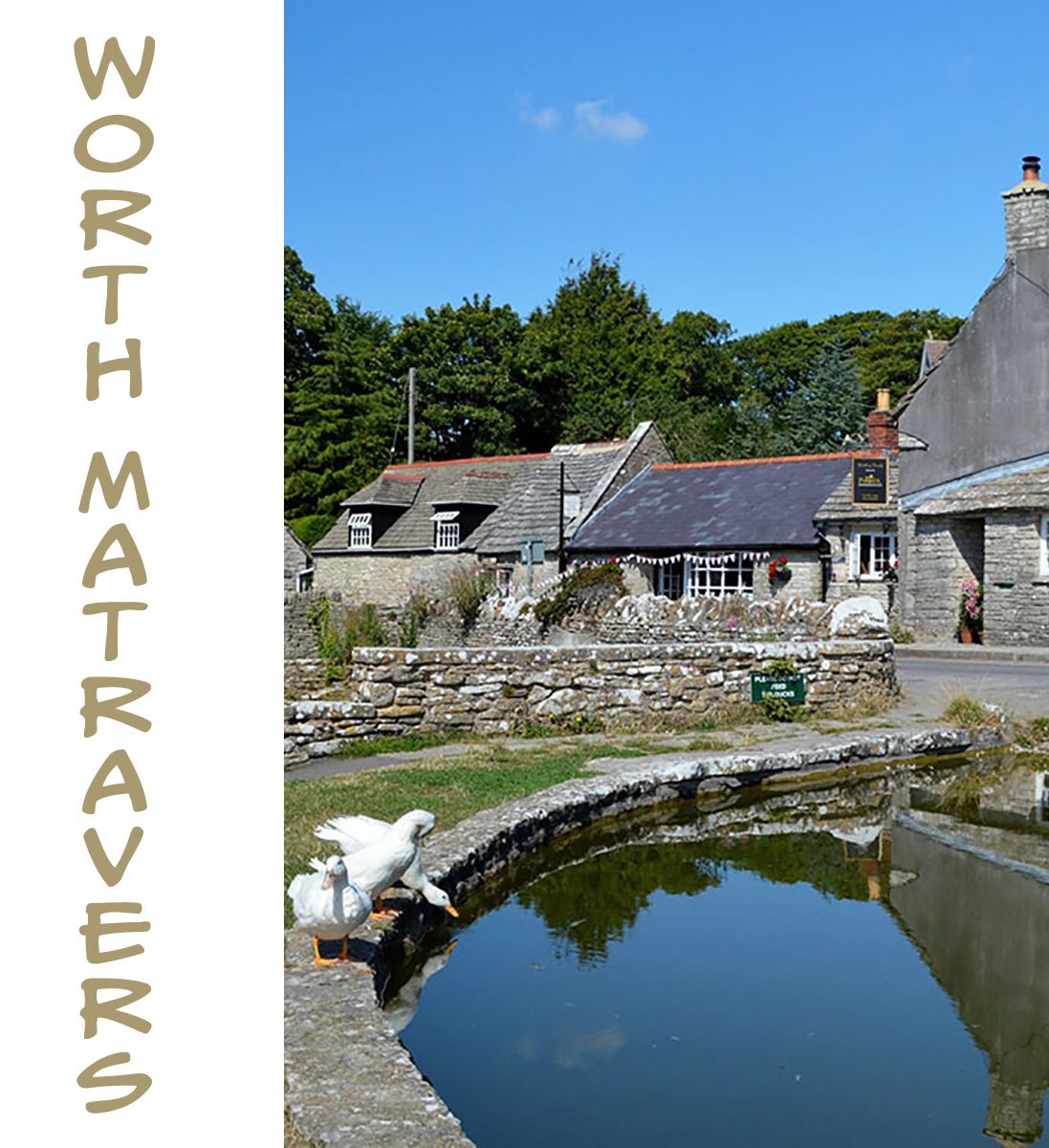 Worth Matravers is a very picturesque Purbeck village centred around a village green with a duckpond.

Like many Purbeck villages, Worth Matravers limestone cottages Ideal base to explore the South West Coast Path and the Jurassic Coast.

Within easy walking distance are some rocky, unspoilt beaches all suitable for bathing, such as Chapman’s Pool, an idyllic but hard-to-access cove with an extraordinary amount of fossils. Also nearby is the most southerly tip of Purbeck, St Aldhelm’s Head. St Aldhelm was a 7th century Anglo-Saxon monk who reluctantly became the first Bishop of Sherbourne.

Nearby is a striking stainless steel monument, resting on a plinth made of Purbeck stone, erected in 2001 to commemorate the development of radar technology carried out by the Telecommunications Research Establishment based at RAF Worth Matravers during the Second World War. Radar technology, developed to warn of impending invasion, proved crucial to the Allied victory.

Attractions in Worth Matravers…

Square & Compass Fossil Museum
The fossils are a combination of specimens from the collection of the pub’s landlord, Charlie Newman, and some donations from fellow enthusiasts. They are primarily from Purbeck.

There are also Mesolithic and Neolithic flint tools found in Dorset, as well as some Bronze Age and Romano British items such as axe fragments, potsherds, coins, brooches, and buckles.

There are several 18th Century shipwreck bits, mainly from the Halswell, which went down at Seacombe cliffs in 1786.

Woodhenge
Another local attraction thanks to Charlie Newman, the landlord of the Square and Compass, is the tree trunk sculpture he built known as Woodhenge. It can be found in the field near the pub.

Charlie decided to create the Stonehenge replica out of leftover tree trunks from two 25ft Monterey pine trees, and was completed in time for the summer solstice in 2015.

This amazing and popular structure is 10 metres wide and 3.5 metres high, weighing about 35 tonnes.
St Nicholas Church
St Nicholas’s is one of the oldest churches in Dorset, being built around 1100, and most of what you see today is that original church. Indeed, some of the stonework appears to come from an earlier building, suggesting that there was a church here in the late Saxon period, (the oldest part of the church is a blocked Saxon doorway).

One of the most interesting features is a 12th century corbel table running under the roofline. The corbels are carved with an array of figures including a musician playing a harp, a rabbit, a bird, and a running animal.

‘Smugglers Way’ walk
The Smugglers Way walk is a circular trail that starts at The Square and Compass pub car park then travels to the abandoned cliff top Winspit Quarry, and along the South West Coast Path to Seacombe.

The trail was once used by Smugglers who under the cover of darkness would store their smuggled goods in the hidden caves and tunnels.

There are spectacular sea cliffs and a secrete cove along the way. It’s about 3 miles in length and takes about 3 hours.
Chapman’s Pool walk
There are some stunning sea and coast views down to Chapman's Pool, a beautifully tucked away cove, not dissimilar to nearby Lulworth Cove.

From the farm car park about half a mile west of Worth Matravers there is a two mile round walk across a flat farm field and then down a steep track down to the bay.

The cliffs are made of a black shale that is eroding away, which makes it easy to hunt fossils such as ammonites and bivalves. On the rocky beach you can just have a picnic sitting amongst the rocks or sun bathe if weather permitting!
St Aldelm’s Head walk
The walk joins the South West Coast Path above Chapman’s Pool, then descends steeply into the valley known as Pier Bottom before climbing up the other side to St Aldhelm’s Head.

The striking but tiny 12th-century chapel on the Head is dedicated to the saint and probably gave the Head its name. After the chapel you'll see a white 'lookout' building manned by the National Coastwatch Institution.

To the east of the Head is the memorial, unveiled in 2001 by Sir Bernard Lovell, to radar (see notes above).
Previous
Next

Eating out in Worth Matravers…

The Square and Compass Pub

The Square and Compass

This well known pub became an alehouse in 1776 and had connections with smuggling, including skirmishes with excisemen at St Aldhelms Head!

An excellent cider that's created behind the pub is served, as is a variety of delicious homemade snacks.

In 1998 the landlord opened a museum of his father's and his own collection of fossils and archaeological items.

Getting to Worth Matravers…

Church Knowle is a 19 minute drive from Wareham. There is also a regular bus service by the No. 40 Purbeck Breezer (timetable here) from Wareham.