A Guide to Wareham's Walls

The earthworks that surround Wareham are one of the best examples of Saxon Walls in the country!

Located between the rivers Frome and Piddle, near to Poole Harbour, Wareham has long been an attractive place for people to settle. There is plenty of evidence of pre-historic and Roman activity in the Wareham area but was in the Anglo- Saxon period (410-1066) that Wareham developed into one of Dorset’s most important towns.

With its wealth and important location as a main Anglo Saxon port, Wareham also became an important target for hostile Viking raids. The Anglo Saxon’s answer was to create a series of defensive walls to surround the town.  We are very lucky that these walls are still so well preserved that you can walk around those defences today!

In 875 AD a Viking army under Prince Guthrum attacked the Saxon town of Wareham.  It was not until some months later that King Alfred finally managed retake Wareham for the Saxons. To protect Wareham from these type of Viking sieges the town was created into a ‘Burgh’ town on the orders of King Alfred.

Burgh towns are considered one of the earliest groups of planned medieval towns in Western Europe. They were typically protected by defensive walls to provide local people a safe refuge from hostile invaders. According to the Burghal Hidage, a document which dates to the early tenth century AD there were thirty five fortified centres  in Wessex, including Wareham.

Wareham is unique in being the only burgh town for which the defences survive largely intact.

Did you know it would have taken around 1600 Saxons to guard, defend and maintain Wareham’s walls!

Photo credits: With thanks to the Seaxia – for providing two Saxon to watch over Wareham’s north-west walls! The two would have been from the ‘Fyrd’ – a Militia group made up of civilian folks who took up arms to defend their homes and land.

Seaxia is an early medieval reenactment society. Based in Dorset they research and reenact history from Anglo Saxon England.

Wareham is surrounded by its defensive earthworks or walls on three sides of the town. There was no known defence on the southern side, where it was probably protected by the river Frome and the boggy terrain.

It is difficult to date the origins of the walls and there may have been some earthworks prior to the Viking raid.

Excavations have revealed that the earth walls were built up and and topped with a timber faced rampart.  During the reign of Ethelred the Unready (10th century), the walls were reinforced and a stone wall of at least 2 metres wide was added to the earthworks.

Wareham’s walls were the 4th largest in the Kingdom of Wessex. They extended over 2200 yards and it is estimated that it would have take approximately 1600 local men to defend and maintain  them. Taxes would been paid by the townspeople in order to maintain and defend the walls. Excavations of the walls also revealed that after the Norman Conquest some of the stone wall on top of the earthworks was robbed and most likely used to build Wareham’s new castle. The walls probably never retained their full defensive strength again.

The walls were classed as a ’Scheduled Ancient Monument’ in 1978, which means they are a nationally important archaeological site and protected as such.

Today the walls are large grassy covered earth mounds (don’t expect to see stone walls!). They make a very pleasant walk around the old part of town. There are good views to the river and surrounding countryside. The walls have also been conserved for wildlife with some grassy areas left uncut for the encouragement of wildflowers. The footpaths are always kept well maintained. There are seven informative panels along the walk telling the history of Wareham and its walls.

Please note that the walls are a protected Scheduled Ancient Monument. It is an offence to do damage to them in any way.

The walk takes around 45 minutes. 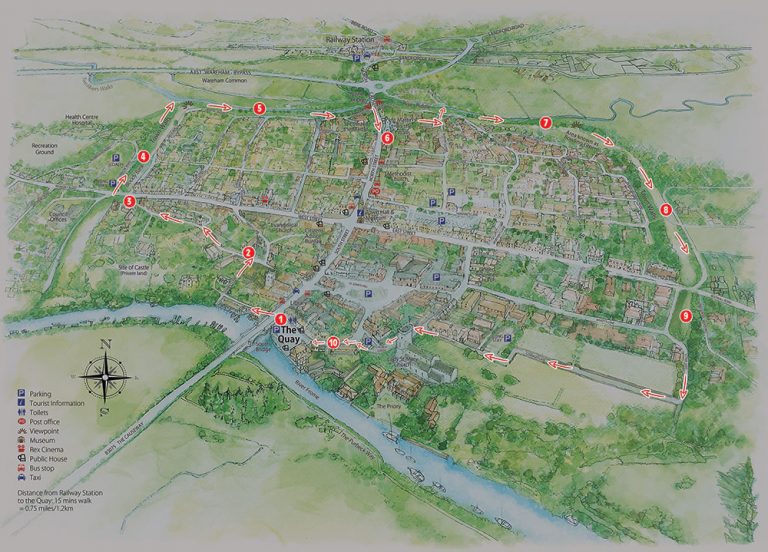 To make it simple we’ll start the walk from Wareham Quay, and note a few other points of interest along the way.

Alternatively there is a large car park at map point 4 where you can also start the walk .

From the Quay there are no signs of the Wareham’s defensive walls. Most likely Wareham was protected by the river Frome and the boggy ground surrounding Poole Harbour and the Isle of Purbeck.

From Wareham Quay – cross over the road to ‘Abbot’s Quay. Turn right onto Tanner’s Lane. Turn left onto Pound Lane. 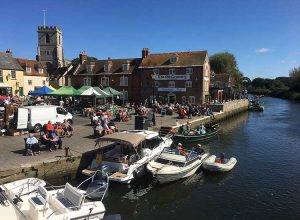 Look out for the old Rectory on the right hand side. In the stone walls, surrounding the house you can still see the remains of a Norman arch believed to come from Wareham’s 12th century Motte and Bailey Norman castle!

Carry on walking on along pound lane. Towards the top of the road and on your left you will see ‘Castle Close’ the site of Wareham’s Castle. In 1066, Wareham was the largest town in Dorset, but twenty years later half of its houses had been destroyed to make way for a Norman Castle. The building would have dominated the south-west corner of the town. 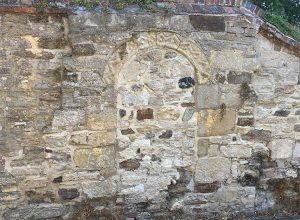 At the top of the road, on the left hand side is a small walled grassy area which is the site of Wareham’s Medieval Town Pound. 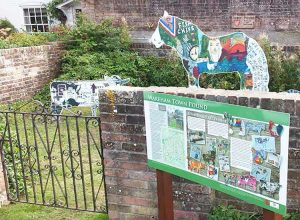 At the end of Pound lane you can see the grassy earthworks of Wareham’s Walls. This area is known as Westport and here you can see a gap in the walls, where the road cuts through.  Originally there would have been defended entrances through the walls, centrally positioned in the North, East and West points of the town. The undefended entrance to the south would most likely have been a ford through the river Frome. Before you cross over tale a look to the left hand side – where you can see small a section of the walls with some 19th century cottages and a Victorian villa at the top and a very deep ditch underneath.

Cross the road and take the path onto the grassy mound to start the first part of the Walls’ Walk. 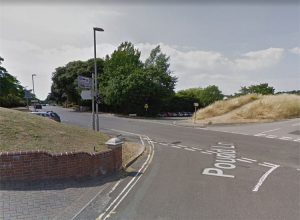 4: The West Walls of Wareham

In 1952 – four excavations were conducted on the West Walls. These discovered that the 9th century defences overlay Iron Age and Roman levels. Sands and gravels from an outer ditch were used to construct the earthwork which was strengthened with through-timbers. The ditch was 50 ft wide and the height of the rampart from the ditch base was 26 ft.
The construction of the walls must have been an immense task for those building it when you consider they would have been using primitive tools such as wooden shovels and wicker baskets. 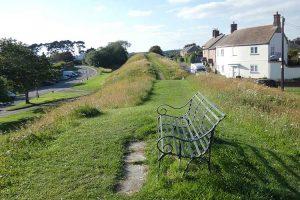 This part of the walls is also known at ‘The Bloody Bank’. So called due to it being a grisly place of execution in Wareham!

There are two accounts of executions taking place on this part of the walls.

The Monmouth Uprising and Judge Jeffries
Some of Wareham’s townsfolk along with many others in Dorset supported the Duke of Monmouth uprising against the King in 1685. The uprising failed and the Duke of Monmouth was beheaded. Judge Jeffries was sent to Dorchester to deal with the captured rebels and at least six of the rebels were hung, drawn and quartered on the West Walls. Afterwards their heads were displayed at the crossroads and their quarters on the South Bridge.

Cross the road to the next section of the walls. To your right is Cow Lane. This narrow lane was probably a droveway to the town’s walls and common for sheep and cattle kept in the town.

The sloping section on the left hand corner is known as the Cock Pits. Victorian antiquaries mistakenly considered this area to be a Roman amphitheatre. The name cockpits was probably derived from the time when cock fighting was a legal sport . In the early 1900s, the choir and clergy of Lady St Mary led communal hymn singing here, the outdoor congregation sitting on the sloping walls. 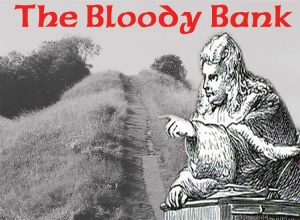 As you turn to the right you can enjoy the view across the River Piddle flood plain also known as Wareham common. The lush vegetation of the river bank provides nesting habitat for water birds and the area is popular with walkers.

Continue along the footpath. Below you will see North Mill, next to the River Piddle. A mill was first recorded here in 1150 and was last used in the 19th century!

Leave the footpath and head downhill on the street called Shatter’s Hill. 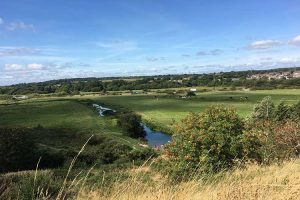 Turn right and walk back towards North Street. When possible, cross the road and turn left towards St Martin’s Church.

This charming little church is over 1000 years old and is one of the most complete examples of a Saxon church in Dorset! Locally it’s still known as St Martin’s-on-the-Walls because of its close proximity to them – though nowadays they’re no longer clearly visible nearby.

To continue on the walls walk just follow the foot path behind the church, along ‘Lady’s Walk’ and turn left into St Martin’s Lane. Continue to the top of the road and you will see the footpath which takes you to the North East Walls. 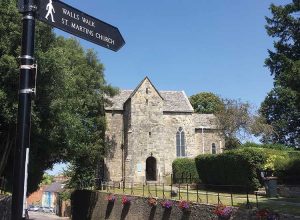 On the left you can enjoy views over to the River Piddle flood plain. If you look closely you may be lucky enough to see deer grazing there.

The Bowling Green
On the right hand side is a small grassy area bounded by low banks. Nobody really knows what this small area was used for. There is a theory that it could have been used for archery practice during the 15th or 16th centuries. By 1746 it was called the ‘Bowling Green Garden’. It was also sometimes used for town fairs in the 19th century.

The East Wall overlooks an area known as ‘Bestwall’. This area is where an archaeological dig uncovered Wareham’s first prehistoric settlers. Read our page on Prehistoric Wareham and the Bestwall Dig.

At the end of Bell’s Orchard lane you will see the ancient pathway which cuts through the walls, which led down to Poole harbour’s edge. 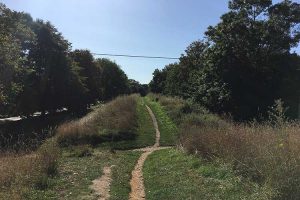 Now follow the path around towards East Street. Cross East Street and continue onto the last section of the walls. The path ends here and you can  street down, turn right to Connegar Lane, walking past the church and left onto Church Lane, and Church Street. Here you can see the Priory Church of the Lady St Mary and next, near the River is the Priory Hotel.

The Priory was founded by Aldhelm, Bishop of Sherborne in the 8th century. Originally a convent it suffered from a Viking attack but was restored in 915 by Ethelfreda, King Alfred’s daughter. During the Norman rule it was made a Benedictine cell of Lire Abbey in Normandy. It was later given to the Carthusians of Sheen until the Dissolution of the monasteries in 1536. The present Priory buildings date from the 16th century. Today it is a hotel.

The church origins are closely linked to the Priory. Originally a Saxon church is was rebuilt in 1842. The oldest surviving part is St Edwards Chapel circa 1100. The church was the resting place of King Edward the Martyr (murdered in Corfe in 978)  before he was removed to Shaftsbury Abbey.

Walk through Church Green to return back to the Quay. 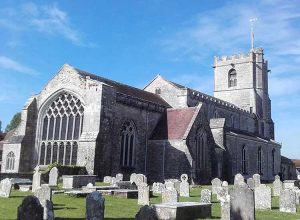 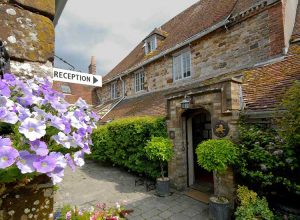 Under the protection of the walls trade flourished in Wareham. With the advantage of an established cross channel port at Wareham Quay the town became an important trade route in Anglo Saxon Wessex.  However, by the 13th century trade had declined due to the development of Poole as a port and the silting up of the river estuary. 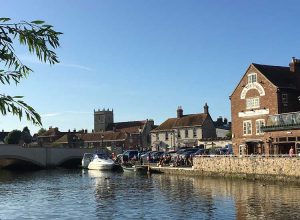 There’s so much around Wareham for you to visit and enjoy – a 1000 years of places !

Wareham has plenty to offer, from boat hire and riverside walks to retail therapy!

Relax with a drink on the quay, a picnic by the river, or a fabulous meal in town!