... T.E. Lawrence and his connection to Wareham 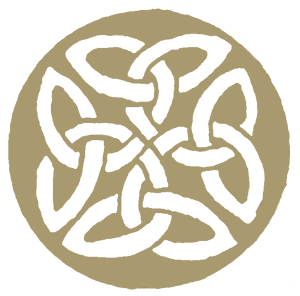 Lawrence of Arabia (as T.E. Lawrence is often best known) was the renowned soldier and writer, famous for his role in the ‘Arab Revolt’ during the First World War. Living nearby at Clouds Hill in Bovington, he was well known in Wareham and there are a number of places you can visit nearby which commemorate his life in Dorset. 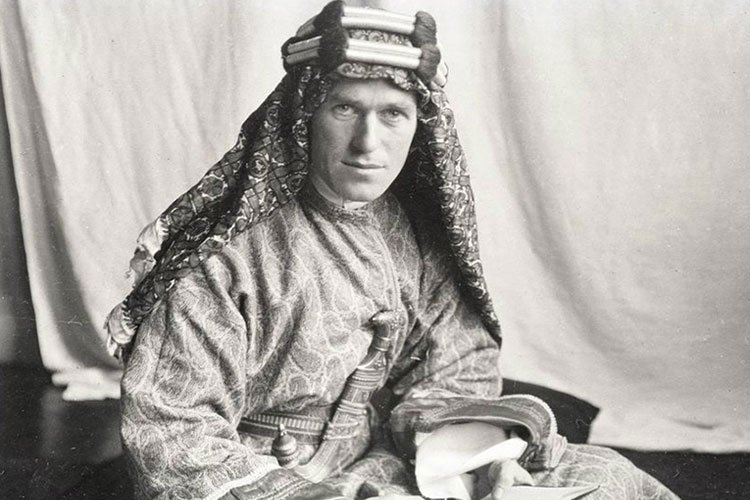 Thomas Edward Lawrence was born in Wales on the 16th August 1888. From the age of eight, he lived in Oxford, where he later studied Modern History at Jesus College.

In 1911, Lawrence started work as an archaeologist in Syria, where he gained a good knowledge of Arabs and Arabic. In 1914, at the beginning of the First World War, he joined the Army, working at the Military Intelligence section in Cairo.

Promoted to Captain T.E. Lawrence, he led Budouin tribesman in guerilla raids against the Turkish Army. He rapidly progressed to Major and then to Lieutenant Colonel and by 1917 he was instrumental in the Arab forces capture of Akaba followed by Damascus in 1918.

In 1918 Lawrence returned to Britain, turning down a succession of presigious posts. He even tried to escape from the public eye by changing his identity. In 1922, he was known as Aircraftsman Ross at Uxbridge, but his alias was discovered and he relocated to Dorset with another new identity.

In 1962 director David Lean’s epic historical drama, Lawrence of Arabia told the story of T.E. Lawrence’s military career in Arabia. Starring Peter O’Toole as Lawrence came to cinemas. The film won seven Oscars and is often regarded as one of the greatest films ever made. However, there was some criticism of inaccuracies in the depiction of Lawrence’s character in the movie. 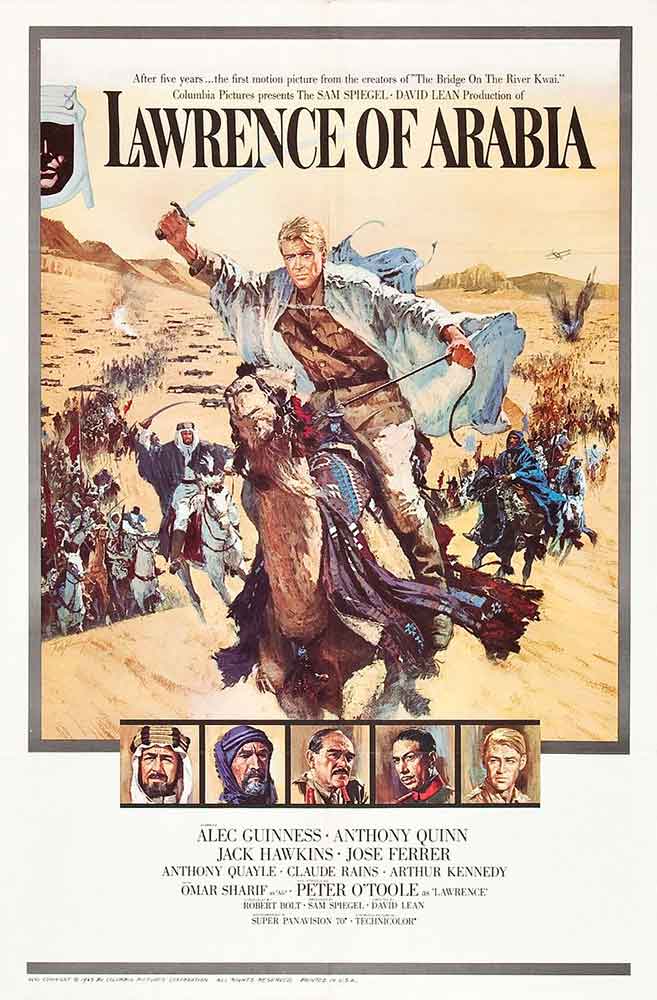 In 1923, using the name T.E. Shaw, Lawrence made Dorset his new home after he joined the Tank Corps at Bovington. He rented a small cottage called Clouds Hill near to the camp. During this time Lawrence completed his most famous book – ‘The Seven Pillars of Wisdom’.

Lawrence was known to have visited the author Thomas Hardy at his Dorchester home, whilst staying at Bovington and would regularly invite friends to the cottage at Clouds Hill.

After a posting to India with the RAF, Lawrence returned to Clouds Hill and brought the cottage from the owners. He began an extensive restoration project at the cottage in preparation for his retirement in 1935.

Wareham was also a favourite haunt of Lawrence.

He spent many an hour drinking coffee in the ‘Anglebury House’  in Wareham (you can still see a plaque next to his favourite seat).

With his love of history, he also took a keen interest in the history of Wareham’s ancient St Martin’s Church (photo shows how the church would have looked in the early part of the 20th century) 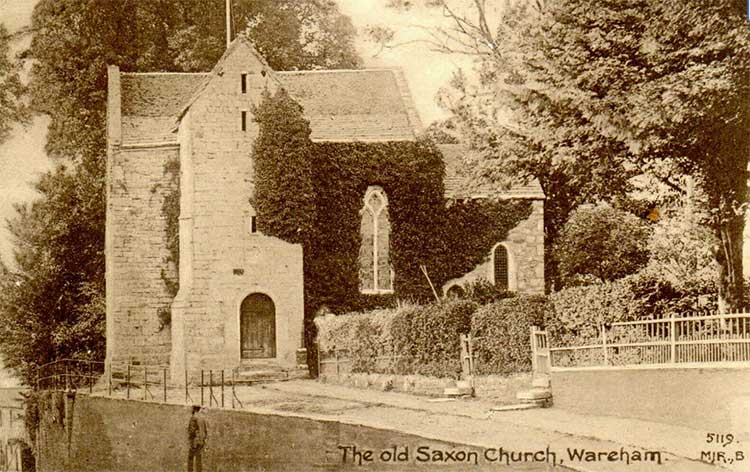 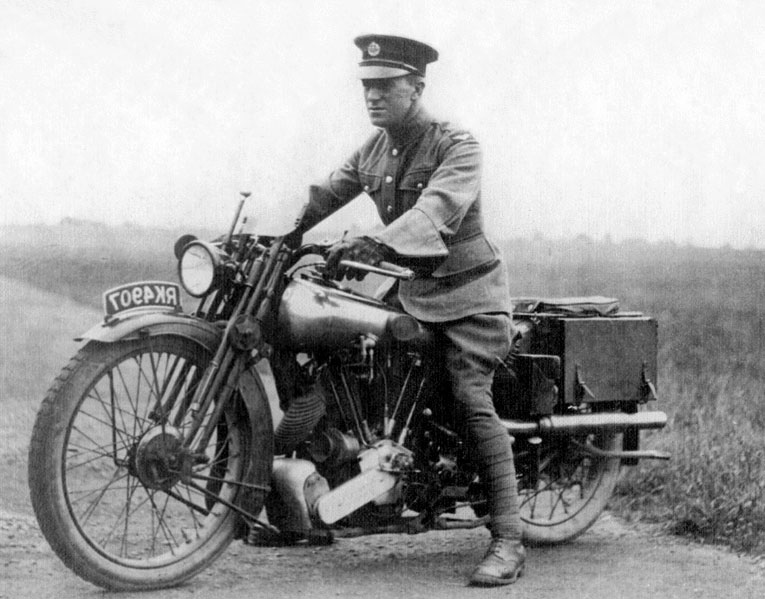 After his retirement Lawrence planned to settle down in peace and quiet but sadly this was not to be.

On the 13 May 1935, on a trip on his Brough Superior motorcyle Lawrence came upon two young cyclists in a dip in the road and swerved to avoid them. He lost control and was thrown from his motocycle, sustaining serious injuries.

‘Lawrence After Arabia’ was an independent movie directed by Mark J.T. Griffin in 2021.

The movie explores the last years in the life of T.E. Lawrence.

After he retires to his cottage at Clouds Hill in Dorset, Lawrence becomes drawn into the world of political intrigue, where many enemies plot against him. The film poses the question of whether the motorcycle crash was an accident or attempt at assassination by the British Secret Service.

The movie was filmed on location in Dorset including at the Church of St Martin in the Walls. 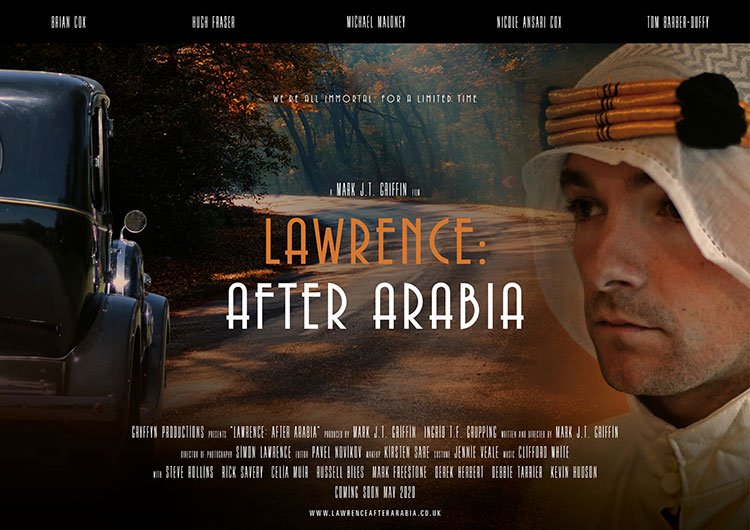 Places connected to T.E. Lawrence in and around Wareham

Lawrence effigy at the Church of St Martin on the Walls

The most important monument to T.E. Lawrence can be visited at St Martin on the walls church on North Street.

The effigy was originally made for St Paul’s cathedral but due to political controversy surrounding Lawrence the statue was not accepted. It was offered to Westminster Abbey and Salisbury Cathedral and neither would accept it. The effigy was made eventually made welcome by St Martin’s church in  Wareham.

With his love of history, Lawrence had taken a keen interest in the ancient Saxon church of St Martins and it seemed appropriate that this little church would become the home of such special sculptural monument to his memory.

The impressive life sized effigy of T.E. Lawrence was made by well known war artist and scuptor Eric Kennington. The Crusader style effigy depicts Lawrence in full Arab dress with a curved dagger in his hand and a whip to his side. His feet rest against a block of Hittite sculpture of two fighting bulls, representing his archaeological research and his struggles in the first world war.

Find out more abut St Martin on the Walls Church 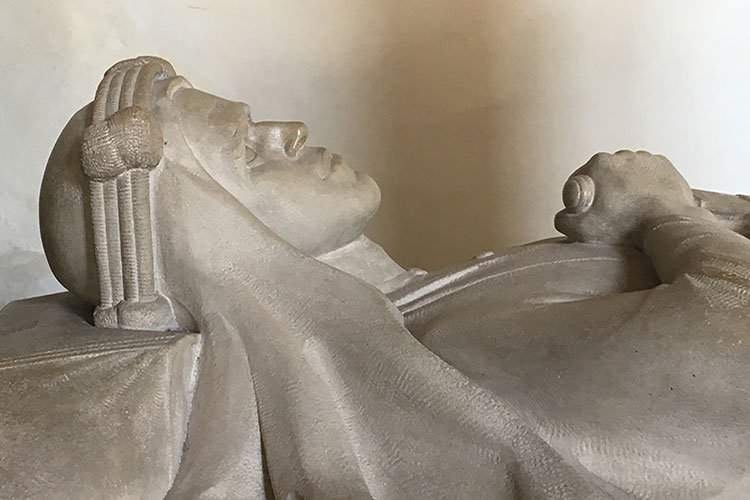 There is a dedicated exhibition to T.E. Lawrence in Wareham Town Museum. With a special section about Lawrence with important documents and other exhibits connected with his life.

After his death the house was given to the National Trust in 1938 by Arnold Lawrence to be kept for the nation as a memorial to his brother.

The cottage is a small, undistinguished forester’s cottage dating to 1808, but altered considerably by Lawrence. Today you can visit the surviving decorations and furnishings – it evokes the austere and sometimes innovative tastes and intellectual interests of Lawrence. 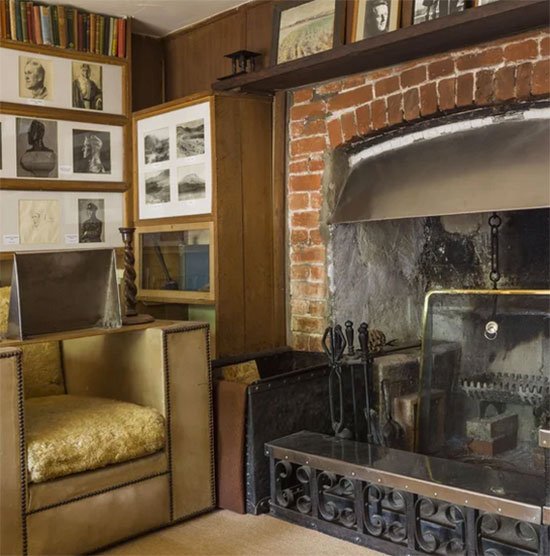 Visit the church where Lawrence’s funeral service took place on the 21st May 1935.

The funeral was well attended and wildey covered by the press. Six pall bearers were chosen to represent different aspects of Lawrence’s life.

Lawrence’s grave can be found in the cemetery, just a short walk from the church. The headstone records his real name, although he was officially T.E. Shaw when he died, having changed his name by deed pool.

More places to visit in and around Wareham 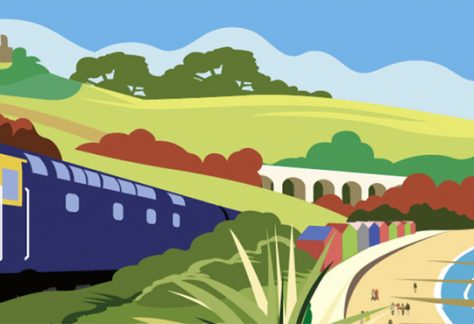 Located a short drive from Wareham, the Swanage Railway is the perfect place to enjoy … A little about the centre … Founded in 1965 by a lady called Margaret Green, … 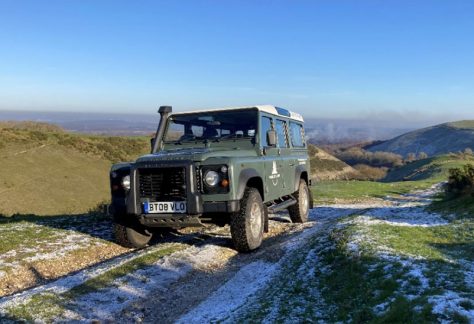 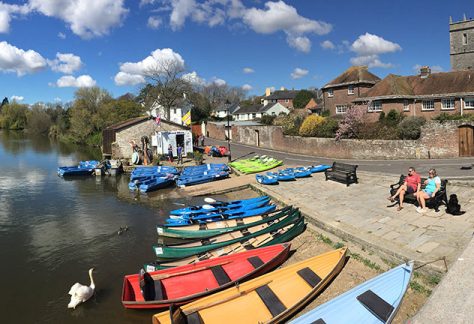 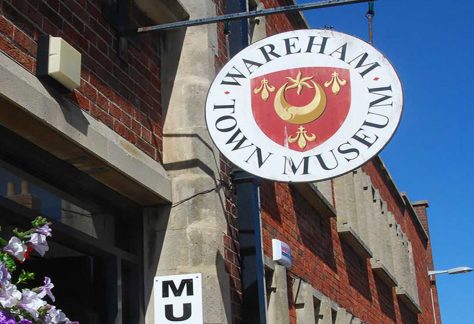 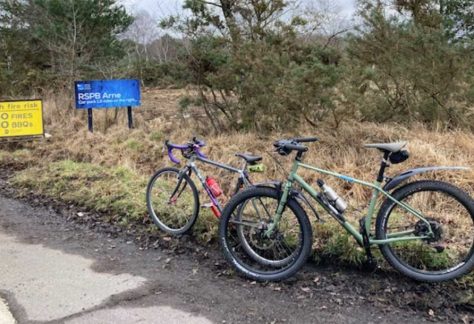 Sustrans is the charity making it easier to walk and cycle. We are the UK’s … 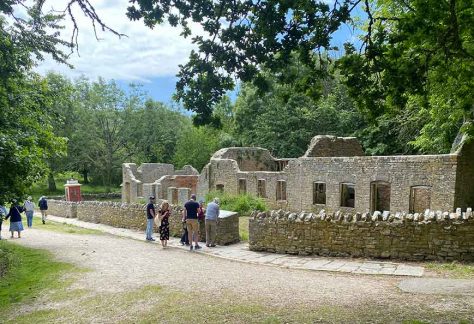 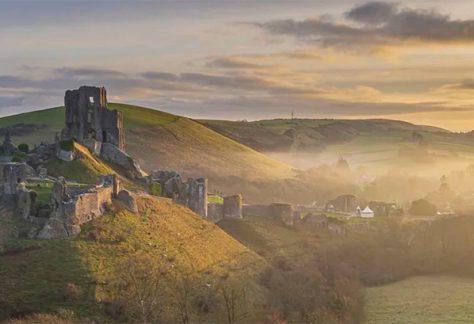 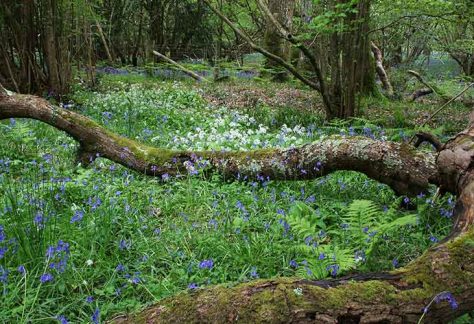 A few miles outside Wareham, you will find this wonderful nature reserve managed by Dorset … 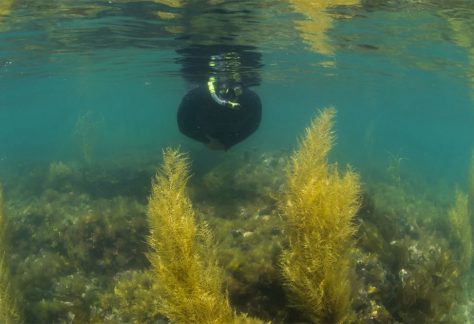 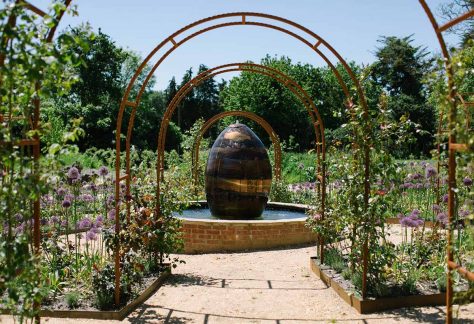 Behind a 150 year old wall, situated just outside of Wareham, Dorset, sits 3.5 acres … 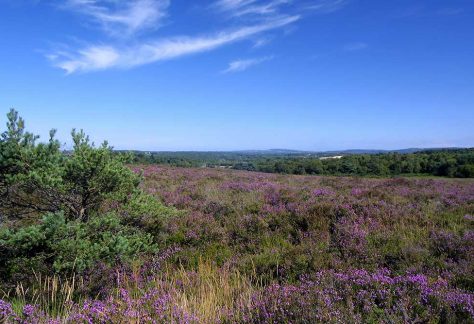