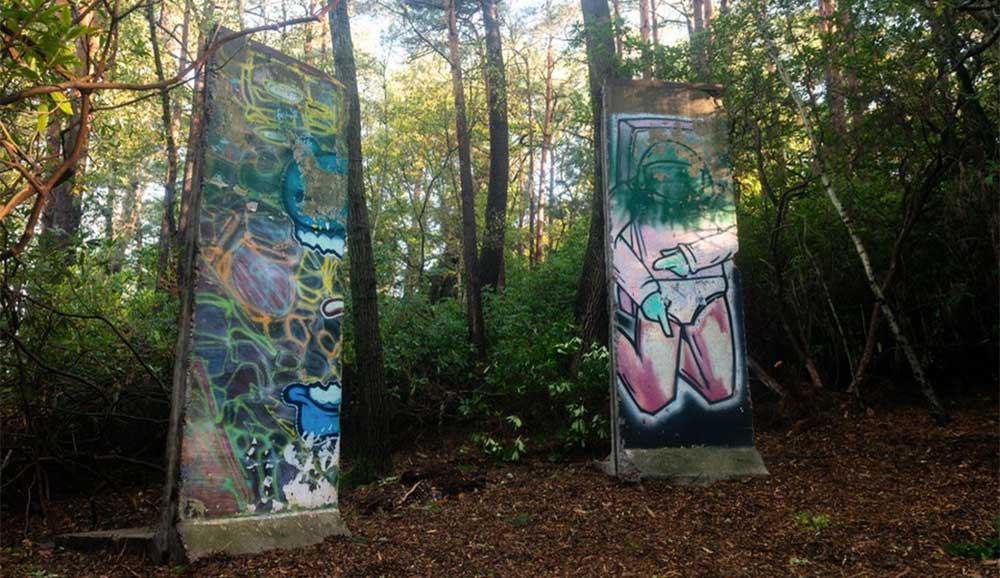 Designed to divide, used to unite

Wareham has long been associated with its walls, with visitors coming to see the best preserved ancient Saxon walls in England! Three years ago Wareham also become known for another wall – a Victorian wall, surrounding the Secret Garden at Careys.

Careys’ founder, Simon Constantine, whose parents co-founded Lush, discovered the ‘lost’ walled garden when his family explored the grounds of their newly purchased Carey House. Now restored and re-imagined the garden has become Wareham’s hidden gem and is now home to the Berlin Wall exhibit.

The exhibit launch took place during a dark November evening, on the 33rd anniversary of the fall of the wall (1989). At the launch, Simon described Careys’ walled garden as a refuge that exude an ‘embracing atmosphere and a healing quality’, a stark contrast to the ‘symbol of oppression of the Berlin Wall.’

The fragments, installed at Careys were relocated to the UK some years ago, but have remained in storage,  largely unseen in since.

The team at Careys hope the exhibit will highlight the juxtaposition between walls that separate people and those that unite. Simon commented ‘At Carey we wish to use walls to bring people together, using the protection they offer to shelter plants and also to foster connection to nature and one another. We feel very privileged to be able to exhibit the wall and to share them with our community.’

'A sensitive and important piece of history'

The Berlin Wall which divided East and West German was almost 27 miles long. It was protected with barbed wire, attack dogs, and 55,000 landmines. The wall stood between 1961 and 1989 but could not survive the massive democratic movement that ended up bringing it down, spurring on the end of the Cold War.

Sadly today walls are still being built to keep people apart. When the Berlin Wall was torn down in 1989 there were only 12 border walls around the world, today there are at least 72.

The Berlin Wall is very much a  symbol of oppression and division and the team at Careys hope to use their new exhibition to start important conversations about the use of border walls in different parts of the world.

Simon explained “We now have seven sections of the Berlin Wall on display and encourage visitors to walk through this space and take a moment to appreciate the tragedy of the walls and also the power of people in how they responded to it.
He added “We felt we had a unique opportunity at Carey to connect people to this sensitive and important piece of history and at the same time draw a parallel with our historic walled garden which is a sanctuary for people and nature alike.”

The exhibition, nestled in the beautiful woodland next to the garden, consists of seven four metre concrete wall fragments, arranged like ancient standing stones. Adorned with original graffiti and street art, these massive monuments, once a symbol of division, have now taken on the mantle of a very moving art installation.

Open to the public from 11 am – 1.30 pm on the days the garden is open. Entry is £2.50 for pre-booked garden visitors and the money raised from ticket sales will be donated to the communities who are kept apart by war and walls.

The Exhibit can also be viewed as part of the ‘Enchanted Gardens’ events this Winter. Click the link below to book tickets. 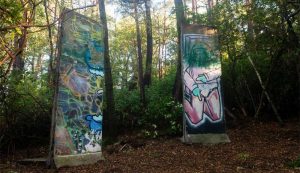