How would our Wareham Saxon ancestors have celebrated Christmas?

Did you know that the word Christmas orginates from the Anglo-Saxon word ‘Cristesmæsse’ - first recorded in 1038?

The date to celebrate Christ’s birth was actually decided in the 4th century by Pope Julius I, long before the Anglo-Saxon invasion of England. The Angles, Saxons, and Jutes – were pagan but they did celebrate the 25th December in a festival known as ‘Yule’.

According to the 8th century writer, Bede – ‘They began the year with December 25, the day we now celebrate as Christmas; and the very night to which we attach special sanctity they designated by the heathen mothers’ night — a name bestowed, I suspect, on account of the ceremonies they performed while watching this night through. (De temporum ratione)’.

Although historians know little of this pagan festival it certainly had a strong association with fertility! The link to fertility and birth to both Yule and Christmas helped the early Roman church to convert the ‘pagans’ of Europe. Hence the Pope settling on the 25th December as the day of Christ’s birth to coincide with Yule celebrations. This tactic of combining pagan traditions with Christianity certainly worked, as by the end of the 6th century missionaries from Rome and Ireland converted the rulers of Anglo-Saxon kingdoms to Christianity.

So how did Wareham’s Christian Anglo Saxons celebrate Christmas?

The Anglo-Saxon Church did not attach the same importance to Christmas as it did to the festival of Easter. However, there were established Christmas traditions which continued throughout the Anglo-Saxon period, but with the focus on religion and fasting they were certainly much more sombre!

One of the fullest accounts is given by Egbert of York (died 766), a contemporary of Bede –

‘the English people have been accustomed to practise fasts, vigils, prayers, and the giving of alms both to monasteries and to the common people, for the full twelve days before Christmas’.

Of interest is Egbert’s mention of ‘alms’ giving to the poor perhaps a predecessor of modern Christmas presents, a tradition most likely started in imitation of the Three Wise Men bringing the infant Christ gifts of Gold, Frankincense, and Myrrh.

Another Anglo Saxon tradition was Wassailing. At the beginning of each year, the lord of the manor would greet the assembled multitude with the toast waes hael, meaning “be well” or “be in good health”, to which his followers would reply drink hael, or “drink well”. So the New Year, similar to today, would start with a glass or two! Such celebrations were most likely being enjoyed many years before Christianity spread in England from around 600 A.D. onwards. The Wassailing celebrations generally took place on the Twelfth Night, the 5th January.

How Alfred the Great was defeated by Christmas and perhaps too much Wassailing!

Alfred the Great was a deeply religous man and a great believer in the Christmas traditions. The Saxon King ruled that the Christmas holiday should be strictly adhered to, apart from those engaged in the most important of occupations!

In fact it has been suggested that Alfred’s rigorous observance of his own law left him vulnerable to Viking attack.

In 877 King Alfred travelled to Chippenham to celebrate Christmas. However, just after Twelfth Night or Wassail Night, on the 6th of January, the Vikings, under King Guthrum made a surprise attack, forcing Alfred out of the town. (Just a year before King Guthrum had invaded and taken Wareham with the town being occupied for many months until King Alfred had forced him to leave!).

This time Alfred was caught out perhaps due to the Christmas holiday! One theory is that the fasting over Christmas left his army too weak to fight the Vikings. Or perhaps the army had enjoyed Wassailing a little too much! Defeated, Alfred was forced to take shelter in the marshes of the Somerset levels. However, all was not lost, as Alfred managed to gather a new army together and finally defeated Guthrum at Edington in May 878.

So spare a thought this Christmas for Wareham’s Anglo-Saxon ancestors. Although most were given almost a fortnight off work, they were expected to fast for the period! Not everyone would have had presents but perhaps some poorer members of Wareham’s society would have received some alms from the church or wealthier members of society.

They must also have been in fear of Viking raids and perhaps were glad that King Alfred had ordered that Wareham be developed into a ‘burh’ town with new fortified walls.

Perhaps in Saxon Wareham those who could not observe the Christmas holiday included those charged with keeping watch on Wareham’s newly built walls – helping to keep the people of Wareham safe! 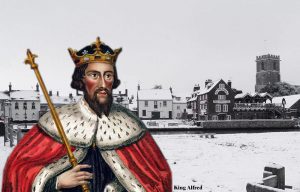